What are BSC Flash Loans? 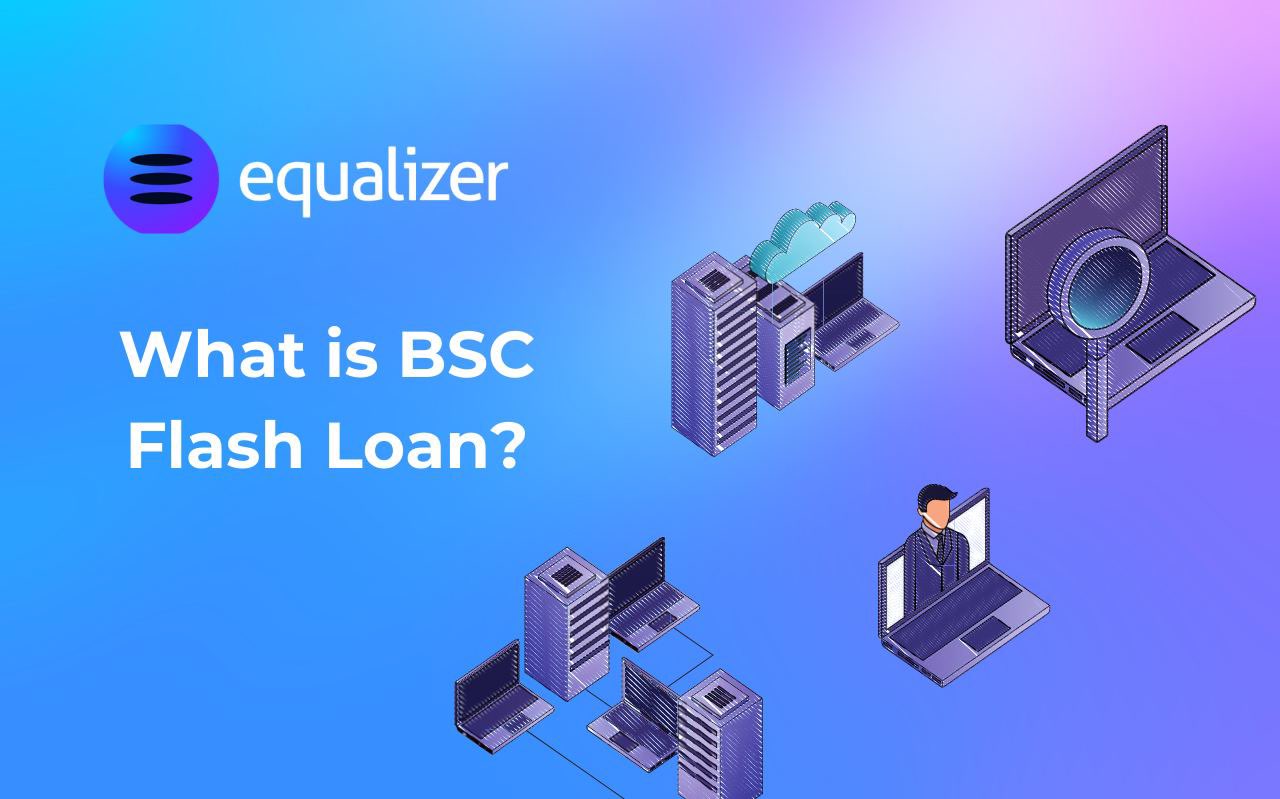 Binance Smart Chain (BSC) is simply a blockchain network that permits applications based on smart contracts to be implemented or carried out. Binance's native Binance Chain (BC) and Binance Smart Contracts (BSC) work together to give users the best of both worlds: the high transaction volume of BC and the smart contract functionality of BSC.

Decentralized apps (DApps) and digital asset management across several blockchains are the primary goals of the BSC platform, which promises to make it easier for developers and consumers to manage their digital assets.

The evolution of BSC

Binance Smart Chain became popular in early 2021 as a result of Ethereum's congestion and gas tax issues, which drove developers and stakeholder investors to look for alternatives. Because of an exceptional price increase in February, Binance Coin's (BNB) gas tax was lowered from 15 Gwei to 10 Gwei, making it even more attractive as a cost-effective and stable alternative to the Binance network.

Binance Smart Chain (BSC) debuted in September 2020, a year and a half after its older sibling, Binance Chain (BC). It is a smart contract platform that works similarly to Ethereum and other decentralized app platforms like Tron and EOS.

It's worth noting that, although it was possible, Binance chose to establish a second blockchain instead of improving the first. The addition of smart functionality to the BC blockchain, according to the exchange, would have slowed the network's pace, making it less efficient.

As seen in December 2017, CryptoKitties problem on Ethereum and, more recently, the Solana network, smart contracts have a history of slowing down their host networks.

Binance's best choice was to establish a parallel blockchain to host smart contracts compatible with Ethereum, the most popular dApp network. However, Binance, which was racing against time to capitalize on the decentralized finance (Defi) and non-fungible token (NFT) frenzy, appeared unable to build a fresh new blockchain from the bottom up.

The availability of Ethereum's code in the open-source space may have made it easy for Binance to fork it. Binance Smart Chain is a fork of the Go Ethereum (Geth) client, with a few tweaks to differentiate it from Ethereum. Instead of Ethereum's present Proof of Work consensus process, they chose a Proof of Staked Authority (PoSA) consensus mechanism (PoW). Short block times and lower transaction costs are possible using PoSA.

What are Flash Loans?

Flash loans are a sort of loan that cryptocurrency traders can use to make it easier to acquire and sell various types of cryptocurrency on an exchange. Smart contracts are used to provide loans and the trades they allow quickly.

Flash loans are a form of uncollateralized lending. Uncollateralized (or unsecured) lending is made available to investors by several decentralized finance (DeFi) networks and protocols.

Just like any other loan, a flash loan lender lends money to a borrower with the anticipation of repayment. However, there are several vital distinctions to be made. Flash loans make use of smart contracts, which are digital agreements set in stone on a blockchain network. The smart contract ensures the transaction only goes through when both parties meet the predetermined agreements. This makes the process of borrowing and repaying a flash loan occur in a single, rapid transaction. In other words, a flash loan is atomic.

A transaction is called atomic when its sequence of operations is indivisible and irreducible. Or, to put it another way, either the entire transaction occurs or none. There will be no half-measures. The Flash Loan utilizes atomicity to allow users to borrow money without collateral.

Why execute a Flash loan on BSC?

Securing flash loans can be discouraging with matters like slow transactions or high gas fees arising especially on a blockchain platform like Ethereum. However, executing Flash loans on BSC comes with benefits which include:

Transaction speed - BSC is one of the fastest smart contract platforms on the market, which contributes to its rapid growth. In comparison to most platforms, which can run up to 10 seconds or more, blocks are generated every three seconds. When you use BSC, you'll be able to trade and secure flash loans four times faster.

Low gas fees - processing a transaction on BSC presently costs an average of 5 Gwei, which is significantly less than most platforms. This offers a less expensive method of securing your flash loans.

The major disadvantage of executing flash loans on BSC is that flashbots are usually not implemented on BSC.

The Flashbots Auction infrastructure employs a first-price sealed-bid auction, allowing users to communicate their bid and granular transaction order preference privately without incurring any costs for unsuccessful bids. In other words, flashbots connect searchers directly to miners and enable them to avoid the public transaction pool.

This technique increases miner payoffs while also offering an efficient venue for determining the worth of a given MEV opportunity. The implication of this in flash loan lending is that with a flashbot, you don’t have to pay for a failed transaction.

Ethereum, not BSC, is where innovation is happening.

Binance primarily hires Solidity developers already involved in the Ethereum developer community. While they will eventually adjust to the BSC, the Ethereum network remains their primary emphasis. As a result, Binance relies on Ethereum's innovation, resulting in new features being put out first on Ethereum and then on BSC. Binance isn't trying to hide this reality at all. Representatives from the exchange have indicated that they are not attempting to be the most innovative platform but rather to provide a low-cost alternative to Ethereum. Ethereum Layer-2 solutions and other Ethereum clone networks are their main competitors.

Front-running is when someone has advanced information on transactions from other beneficial owners using technology or competitive advantage and intends to use it to influence the price and earn economic benefit at the expense of others. It's a complex topic for both centralized and decentralized exchanges to answer (DEX). Front-running is relatively common on various DEXs, for example, through gas or timestamp manipulations or slow matching.

Matching in a hurry

Every block's orders are matched by BSC (with speedy block times). Fast matching leaves little time for the front-runner to react before properly implementing the orders. This is one of the most important aspects of preventing front-running, especially among ordinary market players.

Match Engine that is Decentralized and Transparent

If the exchange has a centralized matching engine, it's tough to argue that it's not front-running. Every block producer and complete node in BSC runs decentralized matching engines. In this manner, anyone can manually repeat the order match with the transactions in the most recent block with the current order book, and if they run a full node, they can observe the order matching in real-time.

Periodic auction matching each block reduces the importance of fast orders, i.e., even if they are hundreds of milliseconds faster, immediate orders do not profit from high-frequency trading behaviors (which is a "really long time" for traditional exchanges). Ordering quickly does not provide any benefit.

What is a DEX?

Let's begin with a few definitions.

On the other hand, a decentralized exchange, or DEX, is a marketplace that is housed on public infrastructure (such as the public Ethereum blockchain) and is accessible to anybody who has the necessary capabilities. Orders on a DEX are submitted via transactions to their own public blockchain, and trades are completed using logic incorporated into smart contracts deployed on that network instead of a CEX. Two of the most popular DEXes are Uniswap and 0x.

Arbitrage is the act of buying and selling assets simultaneously, usually on different marketplaces, to profit from price disparities.

Let's take a look at the antique comic book market as an example. Comic books can be purchased in various places, including specialty stores, in-person or online auctions, and even garage sales.Imagine you're at a yard sale and come upon a rare comic book for a fraction of its market worth. You know your neighborhood comic shop would love to have it on display. So you call them up and agree to sell it to the dealer for a certain amount while concurrently purchasing it from the garage sale for a lower price, garnering yourself a nice little profit. Arbitrage basically works like this: you acquire and sell assets on different markets and profit from the price disparities.

In the exchange world, arbitrage works similarly, except that each marketplace has many buyers and sellers, and the factors that affect the market prices are much more complex.

Equalizer is the world's first dedicated flash loan marketplace, offering loans to meet the growing need for DeFi borrowing and lending. Equalizer has demonstrated proactiveness, efficiency, and innovation in numerous aspects of its service, earning it a position at the forefront of the business. Equalizer is one of the best and decently priced platforms in terms of fees. Despite providing many uncollateralized loans, it has the lowest fees and transaction costs. Equalizer uses TWO times less gas than its competitors for a fast loan call when it comes to gas efficiency. It also has a user-friendly interface, system, and user assistance.

Equalizer vaults: The platform has a rich array of token vaults that secure the assets of flash loan lenders. Apart from providing an easy way for lenders to store their tokens, it also gives borrowers instant access at any time. When a flash loan lender deposits its tokens in its vaults, it will receive vault LPs which can be used to obtain their loans.

Security audits: Equalizer prioritizes security,and it is constantly auditing and improving the platform. Equalizer has invested so much to ensure that it meets the highest industry standards in terms of security, The assets on the platform are kept on secure non-custodial smart contracts. The renowned security audit company, Certik audits the smart chain security audit of Equalizer. Recent results of the audit can be found here.

Get BSC Flash loans on Equalizer

If you want to receive a quick loan, you need to consider fees, gas efficiency, and user-friendliness. Equalizer is one of the most promising flash loan platforms. It is the world's first specialized flash loan marketplace, designed to meet the growing need for DeFi lending and borrowing. It also offers a scalable multi-chain design, an infrastructure that is easy to integrate, and a realistic roadmap.

Equalizer distinguishes itself by providing the lowest fees and transaction costs and a virtually limitless number of token vaults, high liquidity through yield farming, scalable, multi-chain architecture, and integration-friendly features. Get flash loans on Equalizer here